Mr. Joe McCarthy is from our parish.  He is retired now, but he spent all his life working with CIE and then Iarnrod Éireann.  He told us that he sold tickets for the trains. 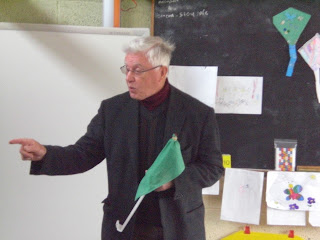 Mr. McCarthy had lots of really interesting stories about the railway.  It was nearly hometime, so we had to finish up, but we think he has lots more stories to tell, and we really hope that he might visit us again to tell us more. 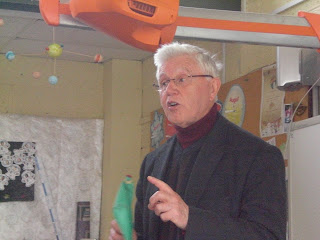 First of all we heard about steam trains, and we were advised to have a look at a story called “The Railway Children”. We can’t wait to read this book.  We heard about the coal needed to power the steam trains, and how, during the war when there was no coal available, trains ran on pieces of wood.  Where Joe worked  (in Wexford at the time) these steam trains often took passengers to the beach for the day. 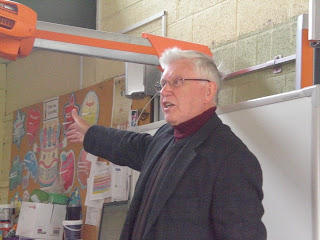 We heard all about when the Chipperfield circus used to come to town on the train.  The poor giraffes couldn’t travel by train because their necks were too long to go under the bridges, but the rest of the animals could come by train.  What a sight that must have been!
We heard another really interesting story about when racing pigeons used to travel by train to Galway, then be released in Galway, and have to race back home to their homes in Dublin.  The first pigeon home was the fastest pigeon.  We can now imagine all the pigeons in the air, circling Galway station, getting their bearings so they could race home.  It’s a pity we can’t see that any more.
For those of us interested in the workings of signals, Mr. McCarthy told us about what the signals look like when the train has to stop…….the signal sticks out like an outstretched arm, and when the train can go…..the signal sticks down at an angle like an arm hanging down.  We heard about the signal box, and how there is a staff like a stick of metal which the man in the signal box had to give the driver.  Without the staff (and the all clear from the conductors flag or lantern and whistle) the train simply was not allowed to go.  This helped prevent accidents on the line.  Only one train could travel on each section of the line at a time, because only one train had the staff each time.  Mr. McCarthy was also telling us about the flange or rim on the wheels of the train.  This is why it is easy to keep the trains on the track.  It’s really the wheels that do most of the work keeping the train running straight.
Well done Mr. McCarthy for such an entertaining and informative talk.  We really hope you come back to visit us again!